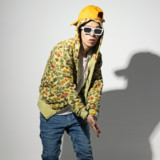 JP THE WAVY, a rapper, is notably considered now as Japan's hottest breakout star and most wanted in the rap game. He started listening to all genres of music especially Hip Hop, played drums during his elementary school days, and later started street dancing. However his passion and focus has always been on the wide range of music and sound, and started rapping when he was 18. His hit track "Cho Wavy De Gomenne” (*Sorry I’m super wavy) became the buzz of the street. The elements of his Music video is mixture of fresh dance moves and current musicality that reaches out to a large audience. At the end of 2018, he released his new single “Neo Gal Wop”. Followed by a new song “Just A Lil Bit” featuring Korean singer/rapper “Sik-K” in January 2019. His style features a variation of high streetwear fashion that gains just as much attention as his music. The ability to express himself by blending both music and fashion into one, as well as his passion to constantly evolve pushes him to innovate his style, making him an icon that sets him apart from the rest.