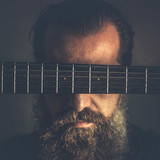 Rowe made his first national television debut on the popular late-night talk show Jimmy Kimmel Live! in 2014. His music has appeared in several hit television shows including Parenthood, Queen Sugar, and The Blacklist. He reached critical acclaim when his song “To Leave Something Behind” was prominently featured in the Ben Affleck-starring film, The Accountant. The popularity of the track — which has amassed more than 6 million streams on Spotify alone — has opened several doors for Rowe, including a burgeoning grassroots fanbase. Rowe will soon merge his love of all things wild food and his passion for music in upcoming episodes of "Can I Eat This." The show will be launched in a new format to give followers an extra special taste of tracks off the new record. Despite suspending traditional touring during the COVID-19 pandemic, this new show format — along with Rowe’s pay-what-you-can virtual home quarantine concerts — keeps his supporters as plugged in as ever. Despite suspending traditional touring during the COVID-19 pandemic,