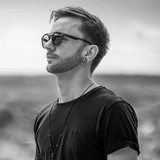 Zürich based Martin Muffler is the head behind the Martique project. Since 2013, he plays as progressive trance dj (Astronix) in various clubs all over Switzerland. In 2017, Martin discovered the well-known Hive Club in Zurich. He was overwhelmed by the musical variety that the house and techno scene had to offer. He started playing House Music and at the same time he founded

"Martique". In general, he plays the highly energetic version of tech - deeptech known today. His productions stand for quality and recognition value without compromise. He performs and produces the way he sees it, not being afraid to try something new. The stage is his home and crowdreading is his foundation. Martin gathered his experience on various stages such as: Universo Parallello Brasil, Burning Mountain Festival, OneLove Festival, HIVE, Spacemonki, X-Tra, Dynamo, Sektor 11, Bagatelle, Sedel, Kaufleuten, Alte Kaserne, Stadthalle Dietikon, Wooz, Galvanik and many more.