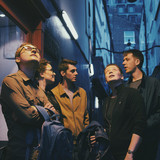 “Clever, literate, intelligent lyrics fired at machine-gun pace so that one is instantly engaged" - Tom Robinson, BBC Radio 6Music Hailing from all over the UK but currently residing in London, Zoe West &amp; The Hanging Baskets have been playing together since 2015 after meeting at prestigious drama school Rose Bruford College. Since their critically-acclaimed debut EP 'Honesty', their lyric-driven indie pop has reverberated around venues across the country. Festival appearances in 2017 included the Tolpuddle Martyrs Festival and Billy Bragg's Leftfield stage at Glastonbury.