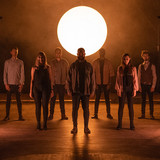 Celtic Worship is a collective of some of Scotland’s most talented folk musicians who approach worship from a unique standpoint, blending traditional and contemporary Christian music with the sounds of their native roots. Initially coming together as a one-off band for an event in 2017, Celtic Worship have since become established trailblazers in the Celtic Christian sphere; revisiting old hymnal treasures and writing new Scottish ecclesial music marked by the sound of their cultural and historical context. The band is composed of musicians from many different backgrounds and styles, including Steph Macleod, Mhairi Marwick, Scott Wood, Gus Stirrat, Naomi Stirrat, Ifedade Thomas and Chris Amer. Their mission is to combine their artistry as professional musicians with their deep love of Jesus and passion for sharing it through meaningful music. Celtic Worship have grown in the worship sphere far beyond their land, touring Scandinavia and reaching much of Europe with their rustic and complex sonority infused with the powerful sound of bagpipes, whistles, and fiddle. The Scottish band's anticipated debut album ‘Homeward’ was released in March 2019, and, spurred on by their dedication to share the sound and experience of Christian worship with well-known hymns, inspiring psalms, as well as new material, Celtic Worship are releasing a brand-new project in October 2021., ‘Morningtide’.