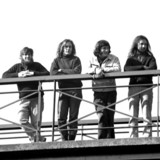 Headband was formed in February 1971, and became one of Australia’s most unique progressive blues-rock bands. The four-piece group was born out of Adelaide and comprised of bass guitarist Chris Bailey (ex-Red Angel Panic); drummer Joff Bateman (Resurrection, W.G. Berg, War Machine); singer-songwriter and keyboardist Peter Head (Johnny Mac and the Macmen, Peter Beagley Trio, Boz); and lead vocalist, harmonicist and guitarist Mauri Berg (Silhouettes, Ides of March, Resurrection, W.G. Berg, War Machine). Headband played progressive blues-rock with symphonic, country and pop influences. But as Peter states, “we had to do all sorts of gigs to survive. Hamish Henry managed Headband, although he also managed rivals Fraternity, with Bon Scott. Headband had a strong work ethic, rehearsing and performing constantly, including three shows a week in high schools across Adelaide. The band practised “group indoctrination” in all types of music, even attending chamber music concerts together. The four-piece group have supported musical legends such as Elton John in 1971 at his Adelaide show at the Memorial Drive Tennis Centre, and The Rolling Stones in 1973 at their Sydney performances. They also finished third in the July 1972 Hoadley’s Battle of the Sounds,

a national performance competition between the best groups representing each state, having been a finalist the year prior.