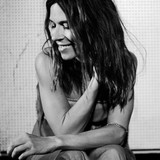 Caroline af Ugglas is a Swedish soul-pop singer who rose to fame as a contestant in the annual Melodifestivalen, appearing in both the 2007 and 2009 contests. Born Caroline Thérese af Ugglas Liljedahl on April 7, 1972, and hailing from Bromma, Sweden, she made her solo album debut in 1997 with Ida Blue on the label V2 Music, followed by Mrs. Boring in 1999. Little success came of these albums, however, and af Ugglas didn't return with another album for several years. She finally returned in 2005 with Twiggs, an eponymous album released on the label Sound Pollution by a band in which she was the frontwoman and co-songwriter. Unfortunately, little success came of this album either. Af Ugglas' big break came at last in 2007 when she qualified for that year's Melodifestivalen with her song "Tror på Dig" and concurrently released Joplin på Svenska, a tribute album to American rock legend Janis Joplin, several of whose songs were adapted to Swedish. While af Ugglas fell short of winning the Melodifestivalen, finishing in sixth place, Joplin på Svenska was a big hit, reaching number three on the Swedish albums chart, and "Tror på Dig" was also a big hit, reaching number 12 on the singles chart. A couple years later in 1999 af Ugglas competed once again in the Melodifestivalen, finishing in second place this time with her song "Snälla Snälla." Released as a single, "Snälla Snälla" was a smash hit, reaching number two on the Swedish charts. The accompanying full-length album Så Gör Jag Det Igen (2009) was likewise a smash hit, topping the charts. ~ Jason Birchmeier, Rovi