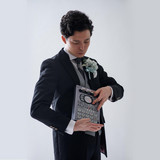 Beat & Ambient producer / Curator. He specializes in creating music that interweaves environmental sounds with old and new styles of music, and the album "Yesternow Once Now" (2017) was called "The Avalanches meets Brainfeeder" and attracted a lot of attention. In recent years, he has released a series of EPs that approach Lo-fi Hiphop and Ambient, and "Stories & Studies" (2019) got #2 on Japan iTunes instrumental Top Albums chart, and "Lunar Maria" (2020) got #1 on the New Age chart. After all these experiences, he released the album "Reality" (2020) with Minori Yoshikawa on Local Visions, an attempt to mix City Pop and Ambient with Alternative R&B. He is also known as a writer and a playlister that reflects a deep insight of New Age and Rare Grooves, and his curation of Japanese New Age/Ambient music in particular get over 6k followers and have garnered him some of the world's best attention in the genre.