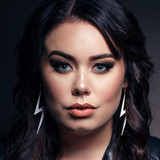 Syd Carter West is an Canadian, Southern-rock artist. From award-winning opera singer to original singer-songwriter of her own dirt and dust, West has found her path. Inspired by the gritty, soulful sound of Amanda Marshall at 5, by 12 she was training in opera winning a national award. At 20, West moved beyond opera and wrote original compositions which have compiled West’s self-titled debut EP. It showcases material culled from the emotional chapters of the sonic book surrounding a toxic relationship. It’s powerful, it’s empowering, and the artist is both of those things — and also a preternatural fresh-bruise. “I'm an open book,” says West. “I have my heart on my sleeve. I don’t know any other way to live.” West’s powerful vocals are reminiscent of Elle King, with a dash of Melissa Etheridge's growl and the soul of Adele. Her earlier influences range from country chanteuse Deana Carter to the electric blues rock of Led Zeppelin.