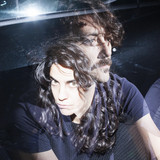 Sara Fontan's experimental emotion and Edi Pou's polyrhythmic energy fuse to form the burning core of LOS SARA FONTAN. They do not record albums as a form of activism: their field is live performance, ever changing, permeable to the environment and free from the industry's productive routines. A concert by Los Sara Fontan is the soundtrack to whatever one wishes to imagine, giving the listener freedom to interpret and feel the experience in a personal and unique way. In just three years as a duet, LOS SARA FONTAN have already toured Spain, Portugal, France, Switzerland and Germany, including festivals of very diverse natures and temples of DIY. Being a violinist means internalizing Itzak Perlman's maxim: "What is learned slowly, is slowly forgotten”. Perhaps that is why Sara Fontan has waited until now to lead a project under her name, after 25 years of living with the violin and exploring its possibilities in all kinds of styles and formats, from classical to noise, including electronic ensembles, video-dance projects, conducted improvisation, free improvisation, post-hardcore or pop. Sara uses the violin as a starting point to arrive at any texture, invoke any mood. Alongside her, Edi Pou (half of ZA!, one of the most active duets in the European underground Do-It-Yourself community for the last 15 years) takes on the challenge of turning percussion into melody, mixing drums, mallets and samples to tense the dynamics from minuscule to epic.