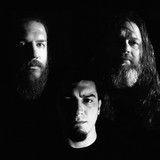 "If there's such a thing as fusing some soul into a doom palette, MOS GENERATOR has achieved that. Seldom will you hear an unambiguous merge between the two outside of BLACK SABBATH's "Sabotage". Mos Generator have tapped into a loud vibe featuring sinister and coarse nuances yet with something revealing far more heart". Ray Van Horn Jr.- Blabbermouth Mos Generator formed during the winter of 2000 in Port Orchard, Washington and have released 7 studio albums, a retrospective album, 2 live albums and a plethora of split records and extended play 12"s on such labels as Listenable, Roadburn, Small Stone, Ripple, Nasoni, South Spit, Heavy Psych Sounds, and Lay Bare. Touring has been just as important to the profile of the band as making records has. Over the years Mos Generator has shared the stage with many great heavy rock bands and have done extensive European tours with Blood of the Sun (2008) Saint Vitus (2013/2017) Elder (2015) Fu Manchu (2017/18). They have also had the honor of playing Hellfest (2014/2018), Roadburn, Freak Valley, Stoned from the Underground and many other European festivals over the years.