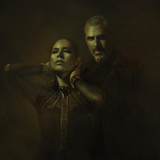 Elsiane was formed in the year 2000, after singer/musician/composer Elsieanne Caplette emigrated to Montreal, Canada from Lima, Peru, and met drummer Stephane Sotto. The duo are an unlikely match, merging the classically trained Caplette with the self-taught Sotto, and doing so with unprecedented style. With shared influences spanning across jazz, rock, electronic and world music, and an intriguing nod to the trip hop of Massive Attack, Portishead and Tricky, the pair creates a musical experience that is entirely unique. The 2007 debut album Hybrid established them as the hottest new act in Canada, and a devoted live following began to form, drawn to the shadow-filled dreamscapes of songs like Vaporous and the hypnotic intensity of Caplette’s voice and stage presence. In 2012 Elsiane put out their self-produced second album, Mechanics of Emotion, which further galvanized both their sound and following. Their third album, Death of the Artist, was released independently in 2017, receiving high praise and being regarded by many as their best work. After the passing of Sotto’s father in 2018, the duo settled down and began to write a new album in dedication to his memory. They feel inspired to take their creativity to the next level and embark on a new chapter, enlisting the talent of visionary producer David Bottrill (Peter Gabriel, Tool, Muse). With the first single “Sinai” out in June 2020, fans will get a preview of the forthcoming transformative era of Elsiane.