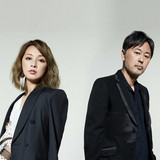 Featuring Do As Infinity

Tokyo's Do as Infinity enjoyed a six-year streak in the upper echelons of the pop charts before disbanding in 2006. The group's blend of 1970s MOR pop/rock and breezy melodies landed Do as Infinity in the Top Ten of Japan's singles chart more than a dozen times between 2000-2005. As a songwriter on the roster of the Avex Trax label, Dai Nagao had already penned songs for Japanese pop idols Ayumi Hamasaki and hitomi before forming his own group, Do as Infinity, in 1999. Vocalist Tomiko Van, who auditioned for her role, and guitarist Ryo Owatari completed the band's lineup. Van's voice is unsurprisingly the group's distinguishing feature, and is deeper than that of most of her female J-pop contemporaries. Within six months of forming, Do as Infinity (sometimes abbreviated to "Do As" or "DAI") had performed almost 100 hundred "street live" shows, including one at shopping center 109, situated in Tokyo's Shibuya district and a perennially popular place where fashion-conscious teenage girls can stock up on the latest street wear. Such shows were a clear indication of the demographic that the group's label had in mind for their latest charges. Do as Infinity's debut single, "Tangerine Dream," was released in September 1999, but it was with third single "Oasis" from the following year that the three-piece cracked the Top 30 of the Oricon charts for the first time. Its follow-up, "Yesterday & Today," was the first of 13 singles by the band to go Top Ten. Although the feel-good mix of soft rock, folky pop and Owatari's hard rock guitar theatrics on debut album Break of Dawn proved popular and took the album into the Top Three, it was in 2001 that Do as Infinity truly launched itself into the public consciousness. That was also the year that the band made their national television debut on TV Asahi's widely watched Music Station -- although Van was the only member to perform (by this time Nagao had decided not to take part in any of the band's promotional duties, occasionally appearing to play live shows with the band). They also went down the familiar J-pop route of licensing their songs for use in anime. Among them was "Fukai Mori," one of the band's biggest hits, which was used in the series Inuyasha. Their third album, Deep Forest

was the group's most successful, selling more than 600,000 copies and reaching number one in the Oricon charts. Do as Infinity performed in Hong Kong and Taiwan in 2002, and in South Korea in 2003. The touring perhaps influenced the direction of the group's fourth album True Songs, which appeared in part to be inspired by traditional Chinese music. The group also performed in New York and Dallas. Since breaking up in September 2005 after a farewell concert at Nippon Budokan, Tomiko Van has pursued a solo career. She also took the lead role in the Tokyo staging of the hit Broadway musical BKLYN in early 2007. Dai Nagao has continued to write songs for Avex artists, while Ryo Owatari plays in the three-piece rock group Missile Innovation. In 2008, the band re-formed. ~ David Hickey, Rovi