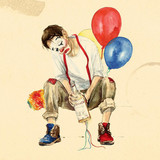 Passenger has come a long way since the release of his first album, Wicked Man’s Rest, back in 2007. The initial incarnation, in which Rosenberg was backed by a full band, was followed by his reinvention as a solo artist and a period of busking, largely in Australia and New Zealand. Then came a year touring the world in support of Ed Sheeran. And then Let Her Go – followed, Rosenberg smiles, by ‘two years running round the world after that song’. He had to run fast: the song, for which Rosenberg won an Ivor Novello, has reached over two billion plays on Youtube. Let Her Go changed nothing and it changed everything. ‘When you’re a busker, you’re an underdog,’ Rosenberg reflects. ‘Everyone wants you to succeed. When Let Her Go got big, it changed the way some people saw me. It was challenging to stay true to myself, to the principles of being a busker. There’s this weird balance of letting the snowball roll down the mountain and gather momentum whilst also trying to shape it: you don’t want it to turn into something you don’t want it to be. I just tried my hardest to make all the decisions for the right reasons, to carry on writing songs I believed in and recording them with people l loved and trusted.’