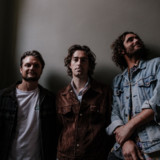 Serving up euphoric disco hooks, to classic house choruses and forays into Latin funk, balearic and psychedelia - New Zealand collective Flamingo Pier deliver their debut self-titled album in June 2021. In 2019 and 2020 they released two widely lauded EPs on Soundway Records, garnering support from Maribou State, Tim Sweeney, BBC 6 Music DJs, The Blessed Madonna, and JD Twitch to name a few. But like many artists in the last 12 months, the group had to navigate the unfamiliar territory of intermittent lockdowns to write and record an album in multiple locations across New Zealand, including the famed Roundhead Studios. The silver lining of this however, was that this was the first time that members Dominic, Brad and Luke were able to create the record in person together instead of collaborating over the internet - because usually at least one of them has been travelling overseas. The self-titled album draws from the band’s wide-ranging taste, as well as what they’ve been playing in order to keep spirits up. Channelling classic emotive house, to disco, Afro and jazz funk on their debut album, Flamingo Pier cite a wide range of musical influences such as Khruangbin, Roisin Murphy, Peven Everett, house legends Masters at Work and Brazilian artist Tim Maia. This translates into an uplifting but nostalgic current running throughout the album - reflecting on last chances, soul-searching and longing for the carefree days of the dance floor.