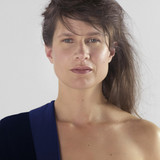 French pop chanteuse Camille attracted international attention as a member of the acclaimed Nouvelle Vague before resuming her solo career. Born Camille Dalmais in Paris in 1978, she focused on ballet throughout adolescence while developing a passion for bossa nova and American stage musicals. At 16, she performed an original song, "Un Homme Déserté," at a wedding and from that point forward, she embraced songwriting, channeling influences including '60s folk and '70s soul. While taking vocal lessons, Camille began playing Paris jazz clubs, and in 2001 she made her professional acting debut in the film Les Morsures de l'Aube, contributing the song "La Vie la Nuit" to its soundtrack. At the same time, her demo tape entered circulation, and upon signing to the Virgin subsidiary Source, she began work on her 2002 debut LP, Le Sac de Filles, a critical and commercial success buoyed by the single "Demeure d'un Ciel." In April 2004, Camille joined producers Marc Collin and Olivier Libaux in Nouvelle Vague, a project dedicated to bossa nova-influenced cover renditions of new wave and post-punk classics. She contributed four lead vocals to the LP, including renditions of the Clash's "The Guns of Brixton" and the Dead Kennedys' "Too Drunk to Fuck," and was a featured performer on the subsequent European tour in support of the album. Camille returned to her solo career in early 2005 with her sophomore effort, Le Fil, which fell just shy of the French Top Ten thanks to the success of its lead single "Ta Douleur." The disc ended up winning Best New Album of the Year honors at the annual Victoires de la Musique Awards, where she also earned the title of Breakthrough Live Act. Days later, Camille issued the 2005 concert set Live au Trianon. Two years later, she adapted Benjamin Britten's A Ceremony of Carols and a collection of a cappella songs from different faiths and countries called God Is Sound that she performed on a tour of churches throughout France. She also contributed the song "Le Festin" to Pixar's 2007 film Ratatouille and voiced the role of Colette for the movie's French dub. For 2008's Music Hole, Camille borrowed from gospel and R&B and used her body as a percussion instrument. The following year, she won the Victoire de la Musique Award for Female Singer of the Year. She then reunited with Nouvelle Vague on their 2010 album, Couleurs sur Paris, and appeared on Jérôme Van Den Hole's self-titled album. On 2011's Ilo Veyou, she took a more stripped-down approach than on Music Hole, focusing on a mix of folk, pop, and chanson that evoked Le Fil. Her music appeared in the 2015 animated film The Little Prince, and her fifth album, Oui, arrived in 2017 on Because Music. Recorded in a 14th century monastery, the album reflected Camille's fascination with the way the words "oui" (“yes”) and "l’ouï" (“hearing”) were open to so many different interpretations. ~ Jason Ankeny, Rovi