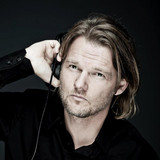 Stefan Zintel presented his very own imprint tildmusic in 2006 as a publishing company for unique music! Within the first years the label has build up a distinct label profile in todays soundart scene with a unique sound, a tildmusic sound! Next to Zintel’s own tracks and collaborations, tildmusic will also release tracks that fit the versatile sound of the label, whether that be soundart or soundscapes

- ambient or techno influenced. Stefan Zintel, born 1967 in St. Ingbert, lives and works in Saarbrücken (Germany). Studied fine arts at the HBK Saar in Saarbrücken / mixed media under Prof. Christina Kubisch. Diploma Fine Arts with Honours. He is an instructor, sound artist, musician and music producer. Since 1996 he has directed of the Studio for Acoustic Communication at the HBK Saar and teaches “electronic music” at the Hochschule für Musik in Saarbrücken.