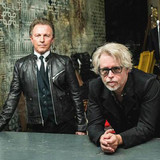 Let's get this out of the way first: The Rembrandts—the pop-rock duo of multi-instrumentalists and songwriters Phil Solem and Danny Wilde—co-wrote the effervescent Friends theme song, "I'll Be There For You." That song, with its inimitable handclaps and jangly guitar riffs, spent 11 weeks at No. 1 on the U.S. Billboard Hot 100 Airplay chart, climbed several charts around the world, and continues to find new audiences thanks to Friends reruns. However, for Solem and Wilde, that song is just one small chapter in a friendship and creative relationship spanning four decades, two bands, four studio albums, two greatest hits records, a handful of U.S. radio hits, and two U.S. Top 40 singles. Anyone familiar with the Rembrandts only from "I'll Be There For You" should know that the band has a rich catalog brimming with smart, well-wrought pop gems. That streak remains unbroken on Via Satellite, the first Rembrandts studio album in 18 years. The meticulous, guitar-driven songs explore every nook and cranny of the pop continuum. "We are individuals, and we do have our own unique sounds, but it's the harmonies, the interweaving of the melodies, that really make the Rembrandts sound," says Wilde. Via Satellite's lyrics are certainly clear-eyed about life's ebbs and flows—including romantic breakdowns, changes of geographical scenery and unexpected emotional fissures—and the leaps of faith people take in order to pursue happiness.