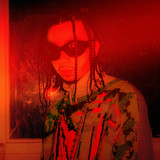 If alien means belonging elsewhere, perhaps KILLY is someone who belongs everywhere. The shy rockstar finds himself at home in the eclectic and the contradictory, effortlessly pairing petaled shirts and spiked glasses, suturing vulnerable lyrics to heavy, sinister instrumentals. Born in 1997 to Bajan and Filipino parents in Toronto, Khalil Tatem was painted by a mosaic of influences from a young age, from Kanye West to Speaker Knockerz to Tommy Lee Sparta. During high school, he rooted himself into the community and nurtured “Killamonjaro” for two long years. His ascendance felt lightspeed as he independently released his debut project Surrender Your Soul, garnered multiple platinum and gold singles, and took to the road for a world tour. After two years on the road, he tethered stories across time and space from his journey in his project Light Path 8. This was followed by his connection with Sylvia Rhone, the legendary head of Epic Records, and his new home with the label. With this partnership, he continues to cultivate each track with the same care as “Killamonjaro.” Privileging quality over quantity, he fine-tunes each project with meticulous precision, elusively hinting to fans at what’s to come. Even with numerous accolades to his name, he’s just getting started. If KILLY is an alien, he's one who can use his diverse upbringing to weave himself anywhere—one whose legacy is already written in the stars.