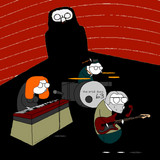 SOMEONE ONCE SAID, “IF TOM WAITS STARTED A SURF ROCK BAND IN THE BACK OF A DALLAS, TEXAS PAWNSHOP, IT’D BE THE PROF.FUZZ 63.” That might be the nicest thing anyone’s said about the weirdo lo-fi rock trio from the north Dallas suburbs, but it’s not wrong. Imagine the bastard love-children of Lou Reed and The Cramps forced to listen to Tom Waits fronting Flipper while babysat by Mark E. Smith and you get some sense of what The Prof.Fuzz 63 is all about. Fuzzed-out guitar. Grinding organ. Pounding drums. Oh yeah! Established in 2014, The Prof.Fuzz 63 have played over 200 shows across Texas, Oklahoma, and Louisiana, plus several tours across a broad stretch of middle America. Three full-length albums and an EP (all on Fort Worth’s Dreamy Life Records ) document the weird lo-fi vibe of the band, as well as their warped lyrical musings, literally “phoned-in” by The Professor. They play nice with just about everyone, and look forward to fuzzing up your hometown soon. FOR FANS OF… Velvet Underground. Tom Waits. Sparklehorse. The Cramps. The Fall. Flipper.