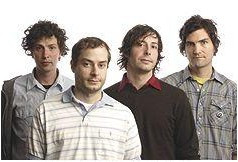 Chin Up Chin Up

Featuring Chin Up Chin Up

Chicago avant-pop combo Chin Up Chin Up was formed in the fall of 2001 by former Punjab singer/guitarist Jeremy Bolen and ex-Nymb singer/guitarist Nathan Snydacker. Bassist Chris Saathoff and drummer Chris Dye completed the original lineup, which spent eight months writing original songs and honing its textured, sinuous sound before ever playing its first live date. In May 2002 Chin Up Chin Up recorded a self-titled six-song EP, issued on its own Record Label imprint early the following year. In early 2004 the group completed a four-song demo, on February 13 celebrating the accomplishment by attending a record release show for fellow Windy City band the Ponys at the local club the Empty Bottle; around 1:00 in the morning, while exiting the concert with his girlfriend, Saathoff was struck by a drunk driver, who never stopped his vehicle and dragged the bassist's body for nearly two blocks. Saathoff was pronounced dead at the scene, and his parents established the Christopher Saathoff Foundation in his memory, recruiting the surviving members of Chin Up Chin Up to headline a pair of benefit gigs -- Quinn Goodwillie of Chicago's Mt. St. Helens filled in on bass, and the shows were so warmly received that the band decided to continue, sending the completed demo to dozens of labels before settling on local imprint Flameshovel. During the recording sessions that followed, Saathoff's bass tracks from the demo tape were isolated, with new songs created around them -- the resulting LP, We Should Have Never Lived Like We Were Skyscrapers, followed in the fall of 2004, around the time that Appleseed Cast bassist Marc Young was named Saathoff's permanent replacement. ~ Jason Ankeny, Rovi