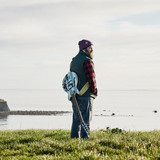 Strap yourselves in because things are about to get interesting. Originally from Austria but now working from Ireland, artist Michael Schimpl has a process like no one else and, as such, is creating some of the most beautiful, thoughtful and unique music available today. Working under the pseudonym diEgita, Schimpl began creating initially to exorcise the death of his father who has passed away some 25 years previously. Making art provided an essential release valve for Schimpl who was finally able to be expressive and work through his feelings. The project has since evolved in to something truly original and spellbinding. With initial influences like Lemonheads, Counting Crows and Pavement and deeper cuts like Oceanside and MONO, there are echoes of driven guitar music and post rock/grunge in the sound. However, conceptually there is a twist that underpins the beauty of these tracks. diEgita battery powers all of his Gear so that he can record live on location, be that in the depths of a creaking forest or on a cliff top overlooking a brooding sky and swirling ocean. The songs are recorded a live jams as the artist reacts to his surroundings, providing an improvised score for sublime power of the natural world around