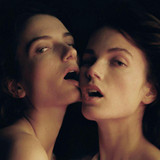 Say Lou Lou is a musical duo from Sweden and Australia consisting of twin sisters Miranda and Elektra Kilbey. After a swift ascension in commercial success and all of the concessions and critique that goes along with it, the twins realized that they’d lost a bit of themselves in the process. Leaving the corporate music world and anything extraneous behind, they set off to the hills of Los Angeles where the two embarked upon what they call their Renaissance time. The result of this effort is the very personal upcoming album released in the fall of 2018, a moody and sensual collection of songs, each of which represents a different facet of the powerful and dynamic female psyche.