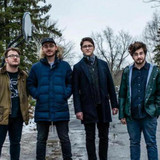 Thomas Aguinaga (Drums/Percussions), Sam Gendron (Keyboard), Phil Goodman (Guitar, Vocals and Percussions) and Marc-Antoine Moisan (Guitar, Vocals) are an Indie Folk band from Aylmer, QC. Across the river from the no-nonsense, straight-laced, won't-crack-a-smile-at-a-dirty-joke Capital of Canada The band which has often been described as a mix between Alt-J and Fleet Foxes saw itself play the Quebec City Summer Festival (2019) as well as the Ottawa Bluesfest (2018). With all that being said, the best show we'll ever play is the one we'll play for you.