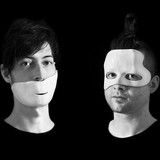 When Due is a two-man band project born on a cold winter night in Castelbuono, Sicily. The project rose from the need of both musicians to expand their vision and their approach to

music. After the experience gained through the years, they decided to combine their skills and experience to give vent to their creativity in a stimulating field such as Electronic Music. They wear a mask split in half, means of communication. Tool that allows alienating from conventions space-time, in order to project themself within a ritual, mystical world. Their music can generally be defined as electro-rock, inspired by an electronic rock/pop structure. They have produced two albums; the self-titled debut album (When Due), mixed by Fabio Rizzo of 800A Studios and Pendolo, mixed by Danilo Romancino and Luca Rinaldo of Almendra Music.