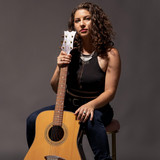 Layla Frankel doesn’t fit in a box. When she moved to Nashville in 2017, fresh off a cross-country tour in support of her debut EP, Tame The Fox, she tried.

But she realized she was too bluesy for the country artists, too poppy for folk, and she had more soul on stage than most Nashville audiences had seen before. Since then, Layla’s music has developed into a form all of its own, with a genre that might be best described as “Soulcana.” It integrates the vocal style of Bonnie Raitt and the sophisticated pop sound of Sheryl Crow. It pays homage to the poetic lyricism of Joni Mitchell and Bob Dylan. Most notably, it plays with melodies, unexpected chord structures, and showcases her stunning vocal agility - all of which can be found on her latest EP, Postcard From The Moon. Recorded at the iconic StartStruck Studio in Nashville, Postcard from the Moon features 6 original tracks that showcase timeless, soulful vocals and skillful craft. Layla’s single, “You Can’t Love Me Like I Loved You,” was a finalist in both the 2020 John Lennon Songwriting Contest, and The Great American Song Contest, and “Josephine” was a semi-finalist in the Music City Song Star Contest. In a world of boxes and labels, Layla’s record aims to redefine the lines that have been etched in our cultural musical lexicon. The new album is her answer to the fear, frustration, and perseverance she has experienced as a musician looking for her place in the world and finding her voice in the process.