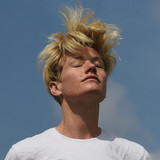 ‘Layered, fascinating and irresistible’ - DJ Mag ‘Astonishingly accomplished. Many influences are on display, but C.A.R. connects them in a way uniquely hers.’ - Electronic Sound London residing, Franco-Canadian Chloé Raunet aka C.A.R. is a unique underground producer and lyricist who’s been immersed in her own brand of electronic art-pop since the days fronting the band Battant.

She writes, composes and produces everything on her own - the result is playful, machine-driven and dark.  Her debut solo album My Friend came out on KTDJ in 2014. It was followed by a move to cutting edge UK label, Ransom Note, and a second LP; PINNED in 2018. Her third album Crossing Prior Street is out March 27th 2020. C.A.R.’s music travels between glacial electronica, post-punk and warming, introspective pop, all emanating from a self-confessed crush on too many genres. She’s shared the stage with many artists, including opening for Cat Power at the Paris Olympia and touring with Gesaffelstein and Teleman, whilst the roll call of legendary European venues C.A.R.’s played includes Berghain and Le Bataclan. Raunet also DJs and co-hosts a fortnightly show on NTS Radio called 239EF (formally Latete Atoto), and as well as her own music, C.A.R.’s vocals have found themselves adorning the tracks of others. She’s worked with Maceo Plex, Gesaffelstein, Andrew Weatherall, Marc Houle, Ivan Smagghe, Krikor, Padded Cell