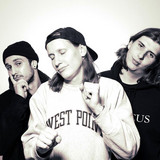 Skate, Punk and Heartbreaks – this is what comes to mind when listening to German emo/pop-punk band Elm Tree Circle. The former solo project that has broken ground in the skate, punk and D.I.Y. scene with their EP Drawn in 2016 has grown to a full four-piece band. Over the last few years, the band has been engaged in extensive touring playing numerous shows across Europe up to Asia and abroad, sharing the stage with such iconic acts as The Ataris, Pears and Such Gold. Set to release on the 11th of May 2018 through KROD Records their first full-length album "The Good Life" is a lovely piece of modern emo-punk. The band has evolved towards a style that inherits all the classic influences of their 2000s pop-punk heroes paired with a good touch of emotional lyrics, melancholic chords and distinct vocal lines that spin in your head after the first listen. Originally written as a self-therapeutic exercise The Good Life leads the listener through an emotionally challenging heart break. Though including songs that look back in nostalgic melancholy, the album doesn’t end by wallowing itself in self-pity but rather advises the listener to open up for new ways and chances. Just as the lyrics of the song Unleaded depict „When you know you gotta go, don’t you overthink it twice“ – the band has found out what they want to achieve. Taking their songs on the road is the next step to go for them now. Be sure they won’t be overthinking it twice.