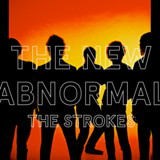 Once the First Impressions of Earth tour was finished, the Strokes went on hiatus, with each member working on other projects. Albert Hammond, Jr. was the first to venture into the solo fray with Yours to Keep, which was released in late 2006 in the U.K. and in early 2007 in the U.S.; he followed it with 2008's Como Te Llama? Fabrizio Moretti played with the indie pop band Little Joy, whose self-titled album arrived in late 2008. Nikolai Fraiture embarked on the folky solo project Nickel Eye, and released the debut Time of the Assassins in early 2009. During this time, Casablancas collaborated with other artists, playing Casio guitar on "Sick, Sick, Sick" from Queens of the Stone Age's 2007 album Era Vulgaris and collaborating with Santigold and Pharrell on the song "My Drive Thru" for a 2008 Converse Shoes ad campaign. He also recorded with the Lonely Island, Danger Mouse, and Sparklehorse. At the beginning of 2009, Casablancas and Valensi began work on the Strokes' fourth album. Progress was slow, however, and Casablancas released his debut solo album, Phrazes for the Young, in October of that year. In 2010, the band collaborated with producer Joe Chiccarelli on some tracks, but they ultimately worked with producer and engineer Gus Oberg at Hammond, Jr.'s home studio on the majority of what would become Angles. Arriving in March 2011, the album took cues from MGMT, Crystal Castles, and other synth-heavy bands, and, for the first time on a Strokes album, featured backing vocals. Angles was a Top Five hit in the U.S. and U.K., and became the band's first album to hit number one in Australia. The record's lead single "Under Cover of Darkness" reached number 12 on the Billboard Alternative Songs chart. In contrast to Angles' lengthy creative process, the Strokes started making their fifth album in 2012. Working once again with Oberg, this time at Manhattan's Electric Lady studio, the group also continued Angles' collaborative songwriting on March 2013's Comedown Machine, a more streamlined, subdued affair that reunited the band with Angles producer Gus Oberg. The members of the Strokes then spent a couple of years pursuing individual projects: Casablancas formed the Voidz, whose politically minded debut album, Tyranny, arrived in 2014. That year, Valensi contributed to Brody Dalle's album Diploid Love, and Hammond, Jr. released his third solo album, Momentary Masters, in 2015. The group reunited in 2016 for a string of shows and Future Present Past, their first EP in 15 years and their first on Casablancas' Cult Records. New Skin, the debut album from Valensi's band CRX, also appeared that year. Along with playing several festivals, in 2017 the Strokes started mapping out their sixth album with producer Rick Rubin. As they worked on material for it, in 2018 Casablancas and his other band the Voidz issued the album Virtue, while Hammond, Jr. released the Oberg-produced Francis Trouble. Preceded by shows including a 2019 New Year's Eve concert in Brooklyn and a February 2020 rally for presidential candidate Bernie Sanders, The New Abnormal arrived in 2020 and introduced a more thoughtful and confessional level to the Strokes' sound and songwriting. ~ Heather Phares, Rovi