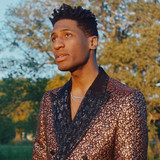 In 2020, Jon Batiste redefined what it means to be productive. Recording and releasing two Grammy-nominated albums, check. Cultural and social advocacy, check. Band leading and music directing on the Late Show, check. Practicing, learning, sharing, growing, check. Was he done there? Batiste? Nah. He decided to build a studio in his dressing room at the renowned Ed Sullivan Theater and invited a few talented friends—including singer-songwriter Autumn Rowe and producer Kizzo—to lay the blueprint for what is destined to become a seminal masterpiece of black pop American music, his forthcoming album, WE ARE. Not to mention, he put all of this together in 6 days. Again, redefining productivity. He ended the year with his music and likeness being centrally featured in the Disney/Pixar film Soul. His composing and songwriting will be featured in his large-scale, genre-melding symphonic work “American Symphony,” set to premiere at Carnegie Hall in 2021 and he has been developing a broadway musical about the life of famed painter Jean-Michel Basquiat. Jon balances a demanding performance schedule—which often includes his signature ‘love riot’ street parades—with public speaking engagements, masterclasses, brand partnerships, community activism, and acting roles. In the wake of George Floyd's murder and in the lead up to the election, he organized several peaceful protest marches, leading thousands in the streets of New York City.