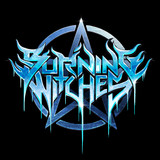 BURNING WITCHES, founded in 2015, are not just one of the hottest exports from Switzerland. Well no, the Swiss girls are one of the most interesting newcomers in Old School Heavy Metal in the past years… worldwide! The band already bewitched the scene press with their first single ‘Burning Witches’ (2016) and achieved the title „Demo of the month“ in German Metal Hammer and Rock Hard. For sure, the powerful Heavy Metal, which also includes influences from Power and Speed as well as traditional Metal, thrills with a great songwriting from band founder Romana and vocalist Seraina and catches listeners with the punchy vocals from the singer, who is often compared with legendary Rob Halford (JUDAS PRIEST). It's not surprising that so much talent led to a spectacular self-titled debut album that was released in 2017, and the Swiss band didn't only receive the attention of the traditional Heavy Metal audience but also from one of the scene heavy weights, Nuclear Blast Records, who quickly signed the band.