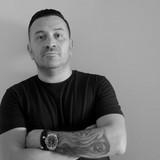 UK born, Aruhtra has continuously thrilled crowds across the globe for the last two decades,from London to Asia.Now based in Marbella he is resident at Puente Romano,Marbella's most sought after beach resort Taking you back to the late 90’s and under his previous name, DJ Antonio, he paid his dues at various London clubs and bars earning his crust. His passion for house and garage shone through and played a huge part in influencing his early musical taste. Until he got his break a won a DJ competition, and thus, a residency at the infamous GARAGE NATION; which lead to him receiving an honorary role as a guest DJ on Dreem Teem BBC Radio 1 Presents show. He changed his name to ARUHTRA in 2017 and has never looked back; working alongside the likes of Martin Solveig, Roger Sanchez, Solomon, Nic Fanciulli, Copyright, The Shapeshifters, Sonny Fodera, Chocolate Puma, Sam Divine, Sandy Rivera, Joey Negro, Mark Knight, Jeremy Healy, Seb Fontaine, Grant Nelson, DJ EZ, Matt Jam Lamont, Karl “Tuff Enuff” Brown, The Dreem Teem, The So Solid Crew as well as many more prominent artists.