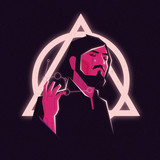 Monster Cyclone is a music project which extends to the visual field, code experimentation

and interactive creation. It begins in 2014 when Santiago Rubio López start to produce electronic music that mixes genres like synthwave, glitch, ambient, drum and bass, breakbeat, among others. His music is inspired on different situations and sensations that are conformed through reverberated and synthetic sounds. Monster Cyclone’s sound it’s conformed by the use of virtual and analog synthesizers, instruments and noises coming from the real world. In his career Monster Cyclone has participated in other projects such as Psychokill’r Off, Sir Adam y ShikiMan. In 2016 signs with M3 Music becoming part of the catalog for digital distribution.