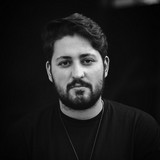 Resat Felek is a Turkish-German DJ & Producer. His interest in music began when he started play guitar and violin at an early age. In the following years, with the increasing interest in electronic music, he started to produce and DJ in Istanbul. Resat has been DJing since 2017, and has been a producer since 2018. In addition to playing in many nightclubs known in Istanbul, in the after party, private parties and in 2019 in Izmir / Turkey Youth carnival held in, he took the stage at the same festival with famous names such as Fedde Le Grand and Feder. He decided to move to the Netherlands in July 2020 in order to reach a better place in his music career and continues his undergraduate education here. He always states that the most important reason for success is to chase his dreams. He aims to highlight the intensity and energy of the person in the dark in the tracks he creates. According to Resat, music is the most effective way to highlight emotions, expand one's imagination and connect with other people.