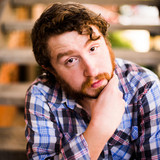 Clint Tomerlin is an Americana artist and songwriter from San Antonio, Texas. He was born into a family where everyone played some kind of instrument, so naturally Clint had to try to one up them and learn too many instruments. After investing time into guitar, mandolin, banjo and piano, Clint started writing his own songs and developing a passion for original music, inspired by Texas Troubadours like Lyle Lovett and Bruce Robison. Clint released his debut album, Lonely Man featuring ten songs written by Clint, as well as most of the instrumentation being played by him… except the really important instruments like bass and drums. It's not like he's Stevie Wonder... Clint is hard at work on his next album, COMING SOON!