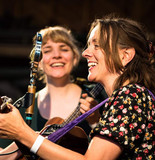 Based in Amsterdam, they sing at a local Irish session every Wednesday, playing their own original songs as well as the traditional songs that made them first perform together. The blend of their voices is often compared to those of the Secret Sisters, I'm With Her, Ye Vagabonds or the Silly Sisters - quite different in timbre, but so seamlessly joined that it's often hard to tell which voice sings which line. The Lasses take inspiration from the songwriting and singing of folk artists such as Sandy Denny, Anne Briggs and Ola Belle Reed, but also from modern songwriters like Gillian Welch, Joan Shelley and Karine Polwart. Nevertheless, with their warm harmonies and subdued accompaniments, The Lasses' songs are instantly recognizable. --- "I have been a friend and a fan of the Lasses for some years now. I love the way they sing, and love the way they are. And it makes me happy that they are being recognised for the love and the talent they possess." - Luka Bloom