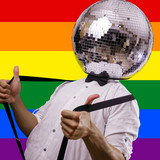 Discoholic is a music group that creates disco-inspired songs with influences from other R&B genres. Think of them as a bartender of discoholic beverages that can satisfy your tastes. Whether you want to dance the night away, contemplate song meanings, or relax with some beautifully-crafted instrumentals—Discoholic can serve you. They aren’t afraid to have fun while making meaningful songs that put the party directly into your speakers. Originally a solo project, Discoholic has since expanded to include close friends with a drive to make music that’s just as enjoyable after the 300th play. They have collaborated with musicians such as FIBRE, Matthew Clanton, Tati, and other vocalists. Discoholic’s lyrical direction ranges from songs about falling for someone new in a club to deeply personal doubt. The group does it all while maintaining a rhythm and groove that is extremely dance-friendly and goes down smooth. Discoholic's debut album Illusion has enraptured some early fans, and their sophomore album is set to have even more meaningful, more danceable, and all-around more impressive music. The bar is open, would you like a drink?