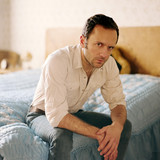 It's been more than a decade since Ian Fisher left his home state of Missouri and moved to Europe, forever changing his life and his music. With songs that combine an international lyrical perspective and a world-traveler’s musical influences with Americana roots, Fisher has remained on the road ever since emigrating, penning over one and a half thousand songs while also playing hundreds of concerts around Europe, North America, and Africa.

His fourteen independently released albums have earned praise from outlets like Rolling Stone — who described him as one of the new Americana artists you need to know and his 2018 release, Idle Hands, as "half Americana and half Abbey Road-worthy pop”.