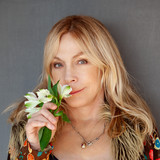 Few artists who rose to fame in the '70s sounded as individual and eclectic as Rickie Lee Jones. Her greatest commercial success came at the outset of her career, but a restless creative spirit, combined with a stubborn refusal to fit comfortably into any one musical niche, insured her status as a highly regarded cult heroine. A lyricist whose work reflected the influences of beat poets, a composer who could weave jazz, folk, and R&B into songs with a distinct pop sensibility, and a vocalist with an expressive and smoky instrument, Jones made a splash in 1979 with her self-titled debut album, a set full of memorable characters and boho cool that earned critical praise and clicked with mainstream listeners thanks to the hit single "Chuck E's in Love." Jones expanded on her stylistic repertoire on her second LP, 1981's Pirates, which added rock and soul flavors to the mix, and the 1983 EP Girl at Her Volcano was a live set that found her spreading her wings as an interpretive vocalist. (It was the first of several albums she would release in which she put her own mark on the work of other songwriters.) As the '90s gave way to the 2000s, Jones continued to explore new directions, experimenting with trip-hop on 1997's Ghostyhead, offering political broadsides on 2003's The Evening of My Best Day, delivering a decisively personal take on faith with 2007's The Sermon on Exposition Boulevard, and taking an introspective look into her own life on 2009's Balm in Gilead. She took full control of presenting her music to the world when she founded her own label to release 2015's The Other Side of Desire and 2019's Kicks. Whatever direction Jones chooses to follow, her work always reflects her personal connection with the music and an uncompromising creative vision. Jones was born on November 8, 1954, in Chicago, but the volatile relationship between her mother and father resulted in an upbringing that led her everywhere from Phoenix, Arizona, to Olympia, Washington, where an expulsion ended her school career. As a teen, Jones left home and began drifting up and down the West Coast before settling in Los Angeles in the mid-'70s. There she worked a series of waitressing jobs while occasionally performing in area clubs, where she sang and honed her unique, Beat-influenced spoken word monologues. She also began a relationship with fellow boho Tom Waits. Her first measure of success was as a songwriter; after her friend Ivan Ulz sang Jones' composition "Easy Money" over the phone to Lowell George, the ex-Little Feat frontman included it on his album Thanks I'll Eat It Here. Then in 1978 Jones' four-song demo came to the attention of Warner Bros. executive Lenny Waronker, who enlisted Russ Titleman to co-produce her self-titled 1979 debut LP. Spurred by the success of the jazz-flavored hit single "Chuck E's in Love," Rickie Lee Jones became a smash both commercially and critically, earning praise for Jones' elastic vocals, vivid wordplay, and unique fusion of folk, jazz, and R&B. With 1981's follow-up, Pirates, she gave early notice that her music would not sit still; employing longer and more complex song structures, her lyrics tackled themes of evolution, change, and death. Two years later, she returned with Girl at Her Volcano, an EP collection of live jazz standards and studio outtakes; with 1984's The Magazine, she made another left turn, teaming with composer James Newton Howard for her slickest, most synth-driven outing to date. After taking a few years off from recording, she resurfaced with 1989's sterling Flying Cowboys, produced by Steely Dan's Walter Becker and recorded with the aid of the wonderful Scottish trio the Blue Nile. Don Was took over the production reins for 1991's Pop Pop, on which Jones covered ballads ranging in origin from Tin Pan Alley to the Haight-Ashbury while backed by jazz players including Charlie Haden and Joe Henderson. After 1993's Traffic from Paradise, she embarked on an acoustic tour; Naked Songs, a document of those unplugged shows, followed in 1995. Ghostyhead was released in 1997 and the standards record It's Like This appeared three years later. Jones returned to original material in 2003 with The Evening of My Best Day, an album that expressed her anger and disappointment with contemporary American politics. During the summer of 2005, Rhino released the career-spanning three-CD anthology Duchess of Coolsville. Two years later, she released The Sermon on Exposition Boulevard, a stunning collection of songs based on friend Lee Cantelon's 1997 book The Words. Balm in Gilead, another album that found Jones exploring personal and spiritual themes, followed in 2009. In 2012, she returned with the Ben Harper-produced covers album Devil You Know. For her next project, she chose to protect her unique vision by taking full control of the process; 2015's The Other Side of Desire was financed through an online crowdfunding campaign and released by Jones through her own label, Other Side of Desire Music. Jones' label also released her next album, 2019's Kicks, in which she put her own stamp on a set of pop tunes and standards with the help of a band of New Orleans-based musicians. ~ Jason Ankeny, Rovi