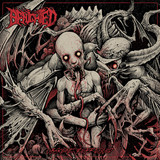 Madness reigns yet again! BENIGHTED deliver a new radical soundtrack to these savage times. 'Obscene Repressed' gives an extreme musical voice to the madness lurking within. Let your mind be shaken by BENIGHTED. In case of side effects, please see the surgeon…… BENIGHTED were spawned by members from French Death and Black metal bands DISHUMANIZED, DARKNESS FIRE, and OSGILIATH, who joined forces in 1998 for a more brutal, heavy and modern way of expression. When their first self-produced and self-titled full-length hit the streets in 2000, it immediately had a strong impact. This turned a side-project into a main act. A fast-growing fan base was built by a string of acclaimed albums: 'Psychose' (2002), 'Insane Cephalic Production' (2004), 'Identisick' (2006), and 'Icon' (2007) were all enthusiastically received. After the releases of 'Asylum Cave' (2011) and 'Carnivore Sublime' (2014), the French sidestepped from the steadily growing complexity by recalibrating their sound along their roots 'Necrobreed' in 2017. After their 20th anniversary, it was time for BENIGHTED to capture the live madness on 'Dogs Always Bite Harder Than Their Master', which was released in 2018. Now, with 'Obscene Repressed', BENIGHTED are ready to continue their razor-sharp journey, again revolving around the human psyche, showcasing the story of little Michael who often battles demons on account of the unresolved oedipal issues with his mother. Sheer brutality!