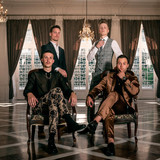 Rich guitar sounds, a remarkable husky voice, tons of energy and then there is the engaging show. The four-piece hard rock band "RedNight from Aachen comes up with a lot of fresh air in the rock scene and provides in 2020 a perfect start with the self-titled debut album. Classic hard rock meets modern sounds on the debut. The listener can look forward to an interesting mixture of power-metal, rock and alternative rock as well as catchy themes. Stereotypical thinking? That doesn’t exist for the four young musicians from West Germany. So, it came besides several contest successes, that REDNIGHT already shared the stage with bands like "Primal Fear, Brings, Rantanplan and "LaBrassBanda. Who will experienced REDNIGHT live on stage, will undoubtedly remember the engaging show, especially the expressive moves of the front man. The band found the way into the radios with their single "Button of Love" and closed the year impressively after their first Open-Air-Tour in 2018. For the band founded in Bristol (UK) in 2011, the music is far from over! „It’s time to show the world, that rock’n’roll still lives!“ the band said, while their time in the studio in 2019. If you read that the press speaks of "On the trail of Metallica" and "international potential", nothing seems to stand in the way of it! www.rednightmusic.de REDNIGHT is supported by IMG Stageline.