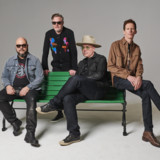 “Flip” leads ‘Detour de Force,’ Barenaked Ladies' 16th studio album as the buoyant and sonically adventurous first single, following with standout singles “New Disaster” and “Good Life,” ‘Detour de Force’ is BNL at its most ambitious, accomplished, intricate, intentional -- and, in some ways, circumstantial. Its gestation was long and exacerbated (as so many things have been) by the global pandemic, and the scope of the resulting album is significantly different than what the group had in mind when it started. ‘Detour de Force’ is, in the end, a potent musical statement, a testament to time well-spent and an open spirit of following where the music leads. Over the course of 33 years, the Toronto quartet has sold 15 million records worldwide and built up an arsenal of hits such as "If I Had $1,000,000," "One Week," "Pinch Me" and "The Big Bang Theory Theme." Widely acknowledged as one of the best live acts on the planet, BNL has hosted a cruise, had its own ice cream flavor, won eight Juno Awards, and was inducted into the Canadian Music Hall of Fame in 2018. As Ed Robertson, Jim Creeggan, Tyler Stewart and Kevin Hearn put it on ‘Detour de Force,’ "Wasn't easy but it turned out alright/Wouldn't trade it for another...You don't wanna miss this mutha."