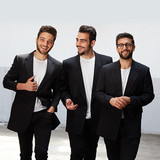 Since their arrival on the international stage in 2010, Italian operatic vocal trio Il Volo (The Flight) have established themselves as one of the biggest names in classical crossover pop, with a sound that combines traditional opera, pop, classical symphonic music, and even Latin. Through live appearances at major opera halls around the world and a victory at the Sanremo Music Festival to hit studio albums like 2012's We Are Love and their 2016 Plácido Domingo collaboration, Notte Magica: A Tribute to the Three Tenors, Il Volo have remained a prolific and dominant force during their first decade. Formed in 2009 while the members were all contestants on the reality television vocal competition Ti Lascio una Canzone (Leaving You with a Song), Il Volo feature the talents of Piero Barone, Ignazio Boschetto, and Gianluca Ginoble. The singers of Il Volo, who were in their mid-teens at the time, were initially individual contestants on Ti Lascio una Canzone. However, the producers decided they should sing "O Sole Mio" together on an episode of the show in May of that year, and Il Volo were born. The trio won the competition and quickly became popular in Europe, representing Italy on Quincy Jones' charity single "We Are the World: 25 for Haiti" and performing at the 60th annual Sanremo Music Festival in February 2010. The trio recorded its first album in London, Los Angeles, and Rome with producer Humberto Gatica, opting for a mix of standards, classic Italian songs, and material penned by contemporary songwriters such as Diane Warren. Il Volo's self-titled debut was released in Europe in November 2010 and earned platinum status; it arrived in the U.S. in May 2011, when the group also performed on American Idol. The CD/DVD Il Volo Takes Flight: Live from the Detroit Opera House arrived in February 2012, followed closely by their second studio album, We Are Love, in November. In 2013, Il Volo returned with Más Que Amor, a Spanish version of We Are Love featuring a duet with Mexican singer Belinda, and the holiday-themed Buon Natale: The Christmas Album. An accompanying live DVD, Buon Natale: Live from the Fillmore Miami Beach at Jackie Gleason Theatre, appeared before the holiday. Early in 2015, Il Volo participated in and won the Sanremo Music Festival, and soon after released the Sanremo Grande Amore EP, which featured covers of pop tunes as well as the new song "Grande Amore." The Sanremo win allowed Il Volo to represent Italy at that year's Eurovision Song Contest; the group ultimately came in third, and "Grande Amore" won the Marcel Bezençon Press Award. Later in 2015, Il Volo issued the concert video Live from Pompeii as well as their third album, also called Grande Amore. Including a blend of original songs as well as classics, the album reached the charts in Italy, Switzerland, Spain, Belgium, and the United States. The following year, Il Volo paid homage to one of their biggest influences with Notte Magica: A Tribute to the Three Tenors, which featured Plácido Domingo. For the group's next studio album, they headed to Miami to record with producer Emilio Estefan, emerging in late 2018 with Ámame, their first Latin pop release. A few months later, in early 2019, Il Volo celebrated their tenth anniversary with the Musica album. ~ Heather Phares, Rovi