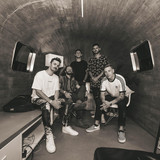 Austin, Texas’ Night Cap blends an extensive palette of sound, balancing the acoustic and upbeat influences of its five members: Ryan King, Jake Bomgaars, Alex Alfonso, Adrian Ayala, and Deryk Camazine.   The band’s nexus was established when guitarist King and bassist Alex Alfonso met at The University of Texas, where Fonzi had been freelancing live gigs in the city. However, early roots for the band were planted when King and keyboardist Adrian Ayala met in grade school in New Braunfels, Texas. Night Cap was formed when Bomgaars was added as a co-vocalist and lead guitarist, and the band found its missing rhythmic depth in drummer Deryk Camazine.   Exploring who they are as a collective, Night Cap bends previously set boundaries of genre delivering an emotional listening experience. Night Cap will continue to shape the sound that they create and share for the world to hear.