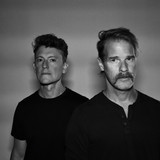 Experiencing an unexpected tragedy or loss often provokes a period of self-reflection, a time to contemplate one’s own place and purpose in the world. That was true for El Ten Eleven’s Kristian Dunn. When a beloved family member passed, Dunn found his own reflections on life emerging in the music he composed. Those expressions led to the creation of Tautology — a sonic meditation on the arc of human life, composed in three parts, out in full on September 18 via Joyful Noise Recordings. Over the course of three discs, Tautology is, in Dunn’s words, “a representation of life from the teenage years, through middle-age, until the end of life.” The sounds on the album echo Dunn’s own experiences, veering from aggressive metallic riffs to blissful ambient soundscapes. And while there are shared melodies and harmonies through all three records, each one has its own distinct qualities: Tautology I, which represents adolescence, is angsty, aggressive and occasionally depressive; Tautology II is head-noddy and mid-tempo, and represents middle age; while Tautology III, quiet and ambient, represents one’s golden years.