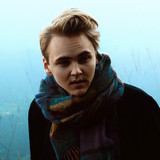 Mixing melancholic folk pop with chilling lyrics about life as a love-craving, grief-riddled young Norwegian, Bendik Finborud draws from the a similar musical landscapes as artists like Thomas Dybdahl, Ane Brun and Jonas Alaska. Bendik Finborud was born in 1995 in Voss, a small town in the western part of Norway. Finding inspiration in nordic folk and folk-pop artists of the time, he soon gravitated towards songwriting. In 2018 he was among the first group in Norway to get a bachelors degree in songwriting, and in 2019 released his first singles. At this time also worked on the music for a new album, for the first time writing about the grief of losing his mother. The first release with this theme, Bargaining, named after one of the seven stages of grief, was released in the summer of 2020, accompanied by a self-made hand painted music video. The song and video gained a lot of praise, with ballade.no calling it "[...] one of the most beautiful things we've seen in a long time" and earning a nomination for best music video at Bergen International Film Festival. Following Bargaining, Finborud has released two more singles, No One Compares, a classic love story stretching the span of a relationships and “Just Another Day”, a song about the refugee crisis. The song describes the absurdity of the situation with an upbeat and unconcerned summer sound, contrasted by marring lyrics criticising the way we view the crisis.