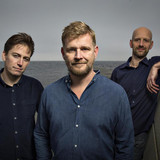 Since the foundation of his trio in 2007 Copenhagen Vibraphonist and composer Martin Fabricius enthuses with a laid back Sound Universe of catchy melodies and subtle improvisation. Each of his released albums received international acclaim in the music media and made him one of the most played jazz musician in Danish Radio. On his numerous tours around the globe, Martin Fabricius found out that his music effortlessly overcomes all kinds of borders and is affecting his audiences almost the same, no matter where he plays. This experience was the main inspiration to his new album “Under The Same Sky” that sees Fabricius opening up a new musical chapter.