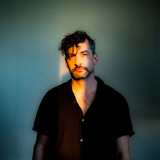 Since Simon Green started Bonobo the expansion and acceleration has been constant, from his beginning in small clubs as a solo DJ / producer, to working with Erykah Badu, Ólafur Arnalds and Jon Hopkins to remixing Michael Kiwanuka, Gorillaz, George Fitzgerald and London Grammar. He has received three GRAMMY nominations, played huge arenas and festivals from a three-times sold out Alexandra Palace to Fuji Rock – and most recently landed a top ten album in multiple countries, top five at home in the UK and a Billboard dance album number one in the US, with 2017's Migration. But as Green embarked on the Migration tour, this constant acceleration combined with a feeling of the world in flux became gruelling. He began to retreat into himself – and for the first time, he wasn’t writing new music as he travelled. Exhausted and wrung-out, he was wrestling with feelings he found hard to express. But slowly, even in lockdown he found inspiration from being in nature – “finding the places that were alien and unique and awe inspiring” – from recalling what he loved about crowds and dancefloors, and from reconnecting with collaborators like Jamila Woods, Joji, Kadhja Bonet, Jordan Rakei, O’Flynn and Miguel Atwood-Ferguson. So “Fragments” is the sound of both struggle and isolation – personally and collectively – and of a surging, joyous return: a gorgeous reminder of how out of such trials, creativity and hope can emerge at the most unexpected moments.