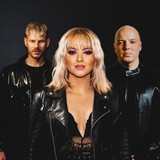 KEiiNOs highest value motto is "unity in diversity", and the Norwegian trio believes everyone should be allowed to dance colourful and free as The Northern Lights. Their mix of uplifting dancepop, folk and joik (traditional Sámi singing) has reached a broad audience beyond their nordic beginnings. The triple platinum-awarded trio have won 7 Scandipop- and 2 Sami Music-awards, made it to #1 on the Norwegian sales-charts, reached #2 on Spotify’s Gloabal Viral Chart and was nominated for the Norwegian Grammys in 2020. Left up to the 200 million TV-viewers, KEiiNO would have won ESC in 2019. The jury's wasn’t convinced (finished #6), but their music had impressed enough people for them to tour Europe and Australia later that year,

including major Pride events in Madrid, Stockholm, Cologne and Oslo and sold-out shows in London, Melbourne and Sydney. In 2021, KEiiNO made a comeback in MGP, and came second with MONUMENT. The song became a hit on Norwegian radio and kick-started a new wave of KEiiNO-singles to be released this year. With their latest single VENUS, KEiiNO is taking a leap into a more guitar-based space..