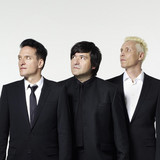 Die Ärzte spearheaded the German punk rock revolution. While never achieving the international renown of rivals Die Toten Hosen, their impact on Central European music and culture is profound, and their satirical and often political songs are even taught in German schools. Die Ärzte (German for "the Physicians") formed in Berlin in 1982. Singer/guitarist Farin Urlaub (born Jan Vetter, the alias a play on the German expression "Fahr in urlaub!" or "Go on vacation!") and drummer Bela B. (born Dirk Felsenheimer) previously teamed in the short-lived Soilent Grün. After adding bassist Hans Runge, the trio adopted the name Die Ärzte for the simple reason that no other band's moniker started with the letter Ä. Quickly emerging as a staple of the Berlin club circuit, the group soon appeared on the 20 Überschäumende Stimmungshits compilation, and after winning an amateur showcase spent their winnings on their 1983 debut EP, Uns Geht's Prima. The record brought Die Ärzte to the attention of Columbia Records, which issued the band's debut LP, Debil, in 1984. Im Schatten der Ärzte followed a year later. Creative differences forced Runge's exit prior to the release of Die Ärzte's 1986 breakthrough self-titled effort, recorded with producer Miccey Meuser on bass. The album introduced the distorted guitar sound that would emerge as the trio's signature in the years to come, while Urlaub's melodies embraced the classic rock & roll influences of his youth, in particular the Beatles. Die Ärzte made headlines in 1987 when the German Federal Center for Media Harmful to Young Persons blacklisted a number of their most popular songs, including the incest ditty "Sibling Love" and the zoophilia ode "Claudia Hat Nen Schäferhund." The ban forced the trio to remove the offending songs from their live shows, and record stores selling their albums were subject to criminal charges. With no product at retail, Die Ärzte's career sputtered, although the adults-only compilation Ab 18, a collection of their most tasteless songs past and present, attracted critical raves, especially from media outlets troubled by the band's run-ins with censors. With 1988's Das Is Nicht die Ganze Warhheit, Die Ärzte even cracked the German Top Ten for the first time in their career. However, at the peak of their fame they announced plans to dissolve, with a farewell tour yielding the chart-topping live LP Nach Uns die Sintflut. Both Urlaub and Bela B. soon formed new bands -- the former King Køng, and the latter Depp Jones -- but neither enjoyed the same commercial or critical success as Die Ärzte, so in 1993 they agreed to reunite, recruiting former Depp Jones bassist Rodrigo Gonzales to join the revitalized lineup. Their comeback single, "Schrei Nach Liebe," was also their most explicitly political effort to date, a polemic against the growing rise of right-wing extremism and racially motivated violence. With the Berlin Wall and its Cold War resonance now resigned to history, Die Ärzte were now upheld as champions of independent thoughts and ideals, and in years to follow Urlaub's lyrics were taught in high school and university classrooms. After the 1993 LP Die Bestie in Menschengestalt proved a best-seller in Germany, Austria, and Switzerland, Die Ärzte mounted a successful reunion tour before returning to the studio for 1995's Planet Punk. Originally conceived as a concept EP on the subject of hair, 1996's Le Frisur soon took on a life of its own and arrived in stores as a full-length release. That same year, Die Ärzte also opened for Urlaub and Bela's longtime favorite band, Kiss. With 1998's 13, the trio reached its commercial apex. The lead single "Männer Sind Schwein" proved their first number one German single, and its success launched the album to the top of the LP charts as well. If anything, the record was too successful. Die Ärzte vowed never to play "Männer Sind Schwein" again, troubled by its mainstream saturation, and the trio spent the remainder of the decade in seclusion, finally resurfacing in 2000 with Runter mit den Spendierhosen, Unsichtbarer! and entering the Guinness Book of World Records via "Yoko Ono," at 30 seconds the shortest single ever commercially released. Another hiatus followed, with Urlaub releasing a solo disc, Endlich Urlaub!, and Bela moonlighting as an actor. After a brief tour of Japan, Die Ärzte issued the double album Geräusch in 2003, returning to number one on the singles chart with "Unrockbar." In 2007 the band returned with Jazz Ist Anders, which became known more for its unconventional pizza-themed packaging -- in homage to the food most consumed during recording sessions -- than its music. Die Ärzte returned in 2012 with their 12th studio album, Auch, incorporating 37 videos comprising live performances and animations for the songs that were available to view on YouTube. In September 2015, in response to racial attacks following Germany's decision to accept a large number of refugees from the Syrian crisis, Die Ärzte's 1993 anti-Nazi punk anthem "Cry for Love" reached number one on the German charts. The campaign to use Die Ärzte's song to publicly condemn these hate crimes was spearheaded by a German music teacher from Osnabrück and the band agreed to donate all proceeds from the song to German human rights NGO Pro-Asyl to support the organization's work with the refugees. ~ Jason Ankeny, Rovi